On 22 of October My dad and I drove up to Riga (Latvia) from Vilnius (Lithuania). The drive was about 3.5 hours of pretty flat countryside.

For lunch we went to a non fancy lunch spot which was a sushi spot called “Tokyo City”. Tokyo City had good sushi but not great. It was also a little expensive for what they served. I would give Tokyo City a 3 star rating.

That afternoon, we returned to our Hotel Spa. We both had an hour message to get relaxed and then swam in the large wave pool. While ‘fancy’ I must admit that I’m not yet into it. I found it a bit weird.

For dinner we went to a medieval dinner place that was very cool. All the waitresses were dressed up in olden day costumes. The restaurant had candles and the felling of an olden day restaurant. I was a little disappointed with the main meal that we ordered, but the starter of soup was very good. This restaurant is called “Rozengrals”. The experience was great. I would give this restaurant 4 stars. 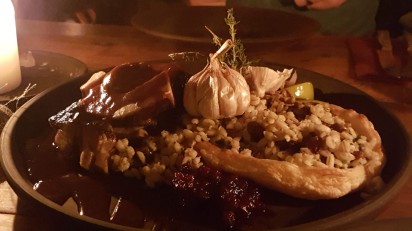 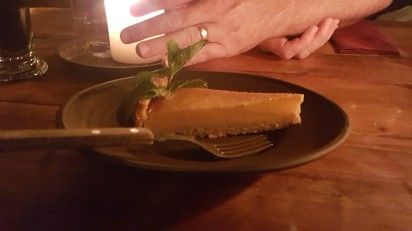 The next morning we decided to see the city of Riga. We went to the top of St. Peters Church. Built in the 15th century the top of the steeple is 123 meters. At the top we were not very happy, because it was very cold and just started to hail. I started to open my umbrella at the top and almost turned into Mary Poppins and blew away.

Soon later we, went on a free Riga tour. it was very interesting, but it was raining, and a quarter through the tour our umbrella exploded because of the wind. It was funny how it just flew into a bunch of pieces. The tour was given by a nice local man and he shared the highlights of the city. It was interesting to learn about how the Russians held control of the country for most of the last century.

That evening we went to a fancy place for dinner which was a sushi restaurant called ‘The Catch’. We got a bowl of rice with tuna and avocado, A plate with toro (tuna) Tuna sushi, Some rolls, a yummy lemonade, Tuna and avocado dish, Miso tuna, Shrimp salad and fried brocoli. I always talk my Dad into getting toro, it is the fatty belly of the tuna. It was delicious. By the time dinner was over, the rain stopped. We enjoyed a 20 minute walk home through the city, parks, and shopping.

That is where our trip ended.

One thought on “Latvia, Riga”