A few days ago I flew over to Taiwan for a funeral of my Aunt, Kailin. The night my father and I arrived we went to a hot pot restaurant with my dads brother.

At the restaurant we ate goat eyes. The goat eyes looked like two medium balls of meat but when my dad and I tried it it was squishy and chewy. For a drink I got a guava juice which was really good because it had small chunks of guava put into the drink.

The next day me and my father where walking around looking for a place to have breakfast and found a good place. At the place we ordered three Chinese dishes which were taro, dumplings and a savory omelette thing with a green mix inside. There we also got a milk tea. Milk tea is my number one favorite drink I got in Taiwan. Milk tea was also invented in Taipei. Most of the drinks there had manufactured lids on top you had to poke with a straw to get into the drink.

Later in the day we went to a great cafe in the park where we ordered something mango – it was delicious! It had shaved mango flavored ice with a mango ice cream ball with a waffle on top and then extremely fresh cut mango slices on the side. it was so delicious! While we were there we saw a movie being shot. I think me and my dad were in it!

After that we went to a place called National Dr. Sun Yat-sen Memorial Hall

In the same building we went into an art hall. At the end of the art hall we met a lady and she said that she painted two of the pieces in the art hall. She showed us them and told us how she made them and where she got the inspiration. 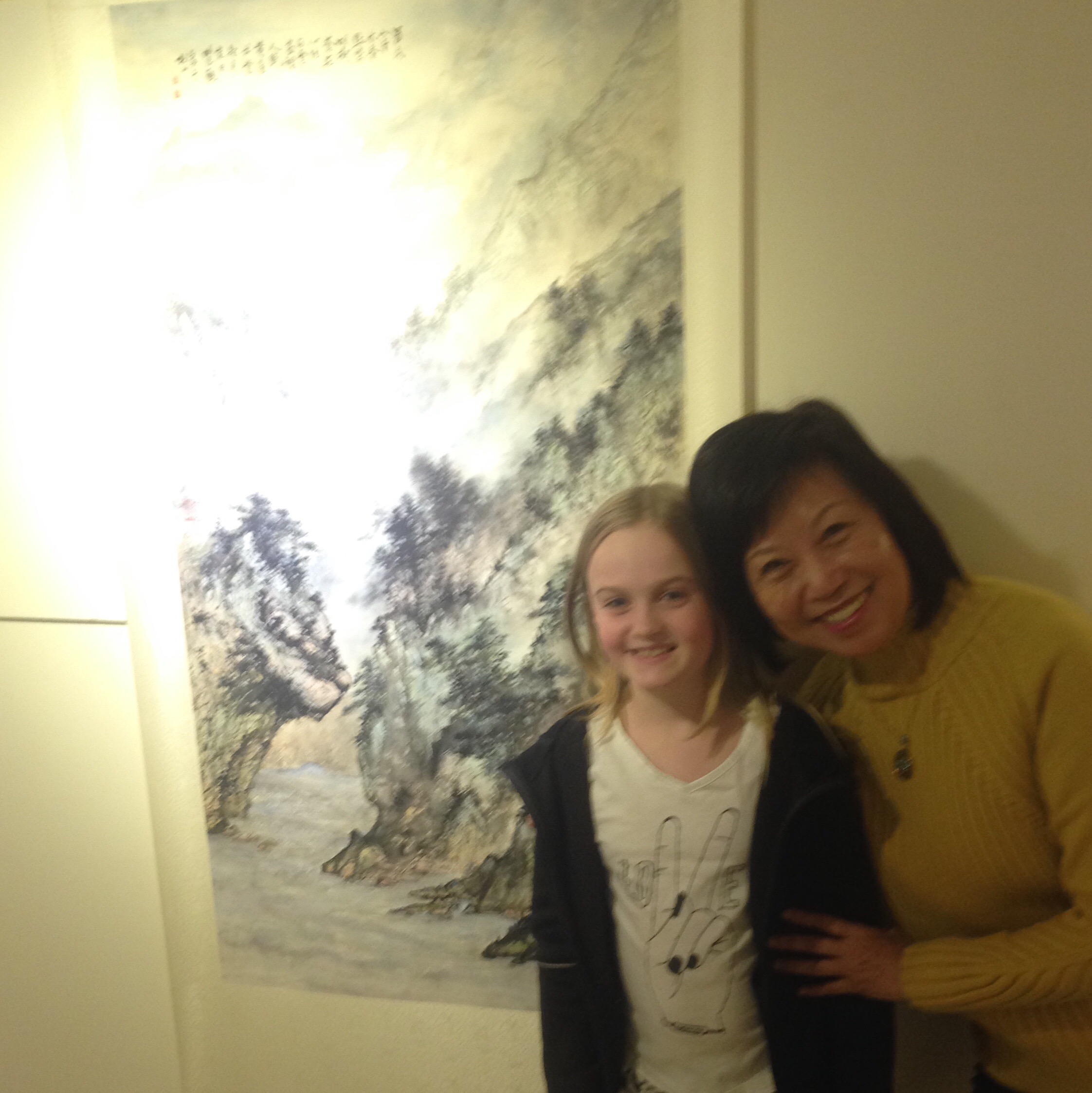 This is one of her pieces that she made.

Then we saw the soldiers that you see when you walk into the building. We saw them swap places and they had a small five minute ceremony to swap places. Because when the soldiers were on their turn they had to stand still without moving for one hour. 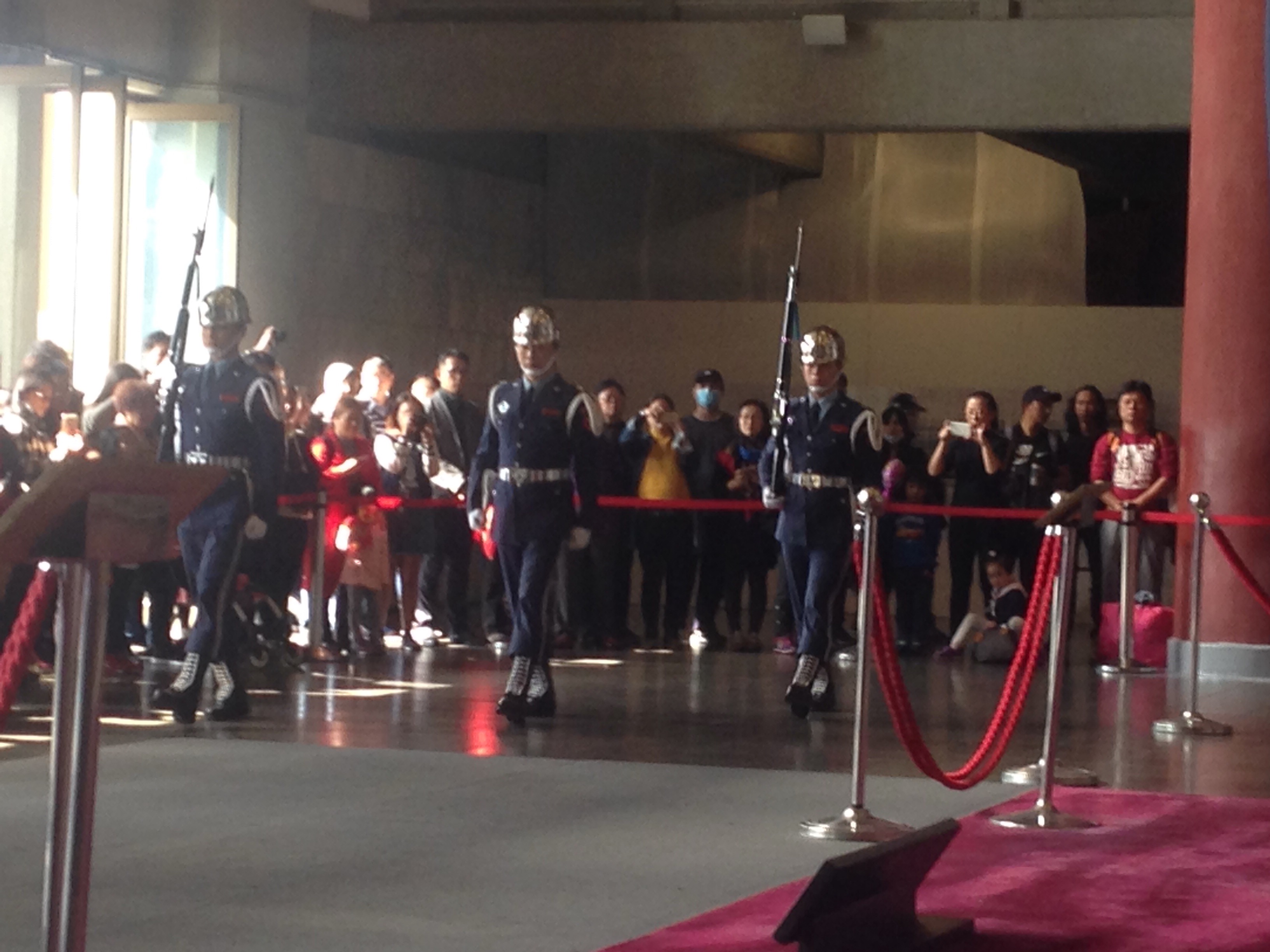 After that we headed over to the Taipei 101 building. The 101 used to be the tallest building in the world. Now the 101 building is about 8th or 9th Place in the tallest building in the world. When we were at the top of the 101 building we went on a really fun ride that was all virtual reality. We put the new Samsung phone hooked up onto your face and then it would be a virtual reality roller coaster and you got to pick which setting to experience. The chairs would move so you felt like you were actually there. 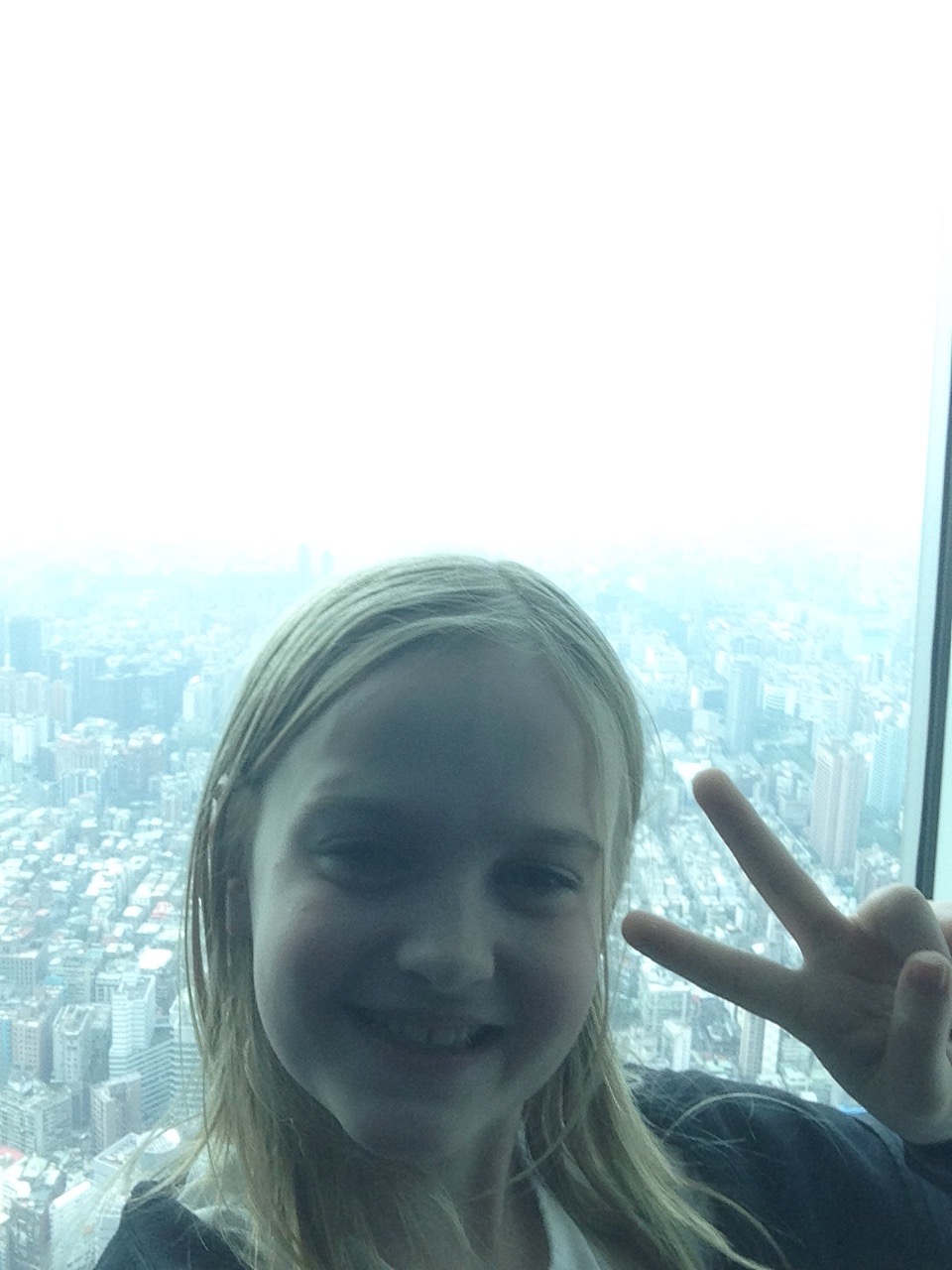 If you do go to the 101 building one thing to remember is that you do have to buy a ticket for kids that are a certain hight. Me and my father did not know that so we thought it would be for free. So when we were at the front of the line we had to go all the way back to the end of the line and get another ticket. Then we went to couple levels down and found a ball (counter weight) and we found out the ball would move to the right, left, forward or back to help reduce the amount of sway at the top.

I may look tired, and I probably was but don’t judge me. Because when I flew back to Amsterdam from Baltimore I only had six hours at home until I had to leave my house and fly to Taiwan.

That night I went to the night market. The first piece of food that we got there was octopus on a stick. They were twirling the octopus around on a stick on top of a grill that had heat coming out from the bottom. She would spin the octopus stick so all sides would get cooked.

Then we got several other street food items, but I have no idea how to explain them. Then it was time to go back to our place for some sleep.

For our Tuesday morning walk we passed a place that had taro pancake and an egg crepe thing. So we got them. You may be wondering why I keep on getting taro, that is because I really like it. Then we continued our walk down to the Funeral place. We participated in the ceremony. Afterwards, they did the cremation and when they were finished we took an hour bus ride up to a Buddhist temple on top of a mountain.

On top of the mountain there were a couple stray dogs. When you live in Taiwan they don’t have pounds. Many people then bring their unwanted dogs to the top of the mountain and drop their dogs off there. The monks at the temple will take care of the dogs.

The older brother brought the urn up to the temple where he and his brother put it in her final resting place. After the bus ride back from the mountain we went to a Chinese seafood restaurant. In the Chinese restaurant there was a Lazy Susan. A Lazy Susan is a part of the table that spins. This allows everyone to share dishes as they spin the Lazy Susan to get want they want in front of them.

One Chinese foods I really liked was the pork bun. It was soft white bread stuff with barbeque pork meat.

In the afternoon we went to the day market and got strawberry’s covered in bright red candied sugar on a stick.

The next day which, was Wednesday, my dad found a really good breakfast place so we went for a walk. As you know, Chinese is not very similar to English and a lot of people did not speak English so we had to just point to what other people were eating show with our fingers how many we wanted. One bad thing about that is we could only get what others got but we also had to try new things.

Later we went to the zoo. The first thing I found on the wall was this –

After a baby koala stops drinking mothers milk and before being able to eat Eucalyptus leaves, it will eat their mother’s poop. The microorganism that helps to digest, metabolize, and detox exists in the poop.

After continuing our walk in the zoo we passed a crêpe place we got a crate with vanilla ice cream whipped cream and bananas.

After the zoo we had to take the metro back to our place and in Taipei. Instead of having like a card that you scan in and out with, you have a little blue coin that you scan and you can only use once. The metros are also really nice because they show you where you are, where the next stop is, and a couple other things that really makes it easy to understand – even when it is all in Chinese.

That night we went to a Japanese restaurant. The food was really good. I got a miso soup and a couple other small things. My favorite dish was a piece of chicken on a stick dipped in cheese, I thought that was really good. I would give that restaurant a 10 out of 10 rating because it’s service was good, it’s food was good, and at the end they give you free piece of gum.

The next day for lunch we went to dim sum. It is a style of Chinese dining where you would see carts coming around your table and then you could point out something and tell them if you wanted something off that cart and they would put it on your table. The restaurant also had a Lazy Susan. At the end, we had some sweets and I really liked the jelly fruit dish.

After that we went on a hike to see a great view of the city and 101 building. The surrounding area was beautiful with lots of plants and nature. I got lots of great selfie’s with the 101 building. After the hike we went to a dinner place which was like a pub. So had fries and burgers. And I got a delicious cocktail there.

6 thoughts on “Taiwan and it’s Country”